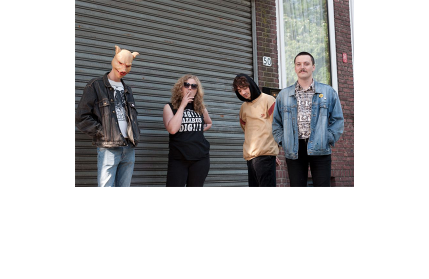 Spazz Records is a new independent record label from Rotterdam, Netherlands. On September 7th their first release will be available. Their first signing is the new band, Pig Frenzy, also from Rotterdam. The release is accompanied by a party that embraces both the launch of the new label and the release of Pig Frenzy.

The label Spazz Records is an initiative of music fanatics from Rotterdam. Both have been sharing a love for 7″ vinyl singles for years. Last February they decided to release records themselves in this format. The label has a strong preference for rock ‘n’ roll music. From garage, surf, punk rock and dirty indie to rhythm & blues, both national and international. All releases will be available in a limited edition of 300 copies.

Read More
The first release is the Rotterdam garage punk formation Pig Frenzy. On May 30th, Pig Frenzy released its first EP on cassette. From this EP, “I Do not Need You” and “Oral Moral” are being released on 7″ black vinyl. Pig Frenzy is: Timo (vocals), Micha (guitar), Amber (bass) and Lukas on drums. Their sound is a mix of garage rock with punk, post-punk and surf influences.

On the evening of September 7th this release will be celebrated in Rotterdam with a live performance of Pig Frenzy and the launch of Spazz Records.
Support will be given by the Amsterdam synth-pop act Karel (NL), the first ever performance of Brussels based lo-fi synth punk band Cry (BE) and hardcore punk band SFD (NL) from Eindhoven. Pig Frenzy will be the headliner and the Spazz DJ Team finishes off.

Location: Poortgebouw, Stieltjesstraat 38, Rotterdam, Netherlands
There is no entrance fee, but a donation to the door is highly appreciated.

Several releases are scheduled in the coming months, including from Spain and Canada. We will keep you informed and updated.