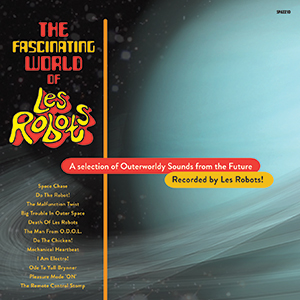 Are you ready to explore a new world? Are you ready to explore the world of Les Robots? Are you? Coming up on Friday the 13th of September: “The Fascinating World Of Les Robots”. The first album of this otherworldly instrumental menace. An album that tingles the minds of sci-fi geeks, that arouses the space age nostalgics, an album that subjugates anyone that comes in contact with it.

“The Fascinating World Of Les Robots” by Les Robots will be pressed in a batch of 300 hand numbered copies on 12″ vinyl.

LISTEN TO “DO THE ROBOT!” BY LES ROBOTS