Why should we limit ourselves to just earthly delights? Right! We shouldn’t. An outer space formation has found our planet and indulged itself in the earthling’s 60’s treasures of instrumental rock-n-roll and surf sounds. Due to maintenance on the intergalactic express way they arrived over fifty years late on earth, yet here they are: Les Robots! [APPLAUSE]

“Do The Robot! / One Way Ticket To The Moon” by Les Robots will be pressed in a batch of 300 numbered copies on 7″ vinyl. Pre-order: from Monday October 8. Release date: Friday November 17. 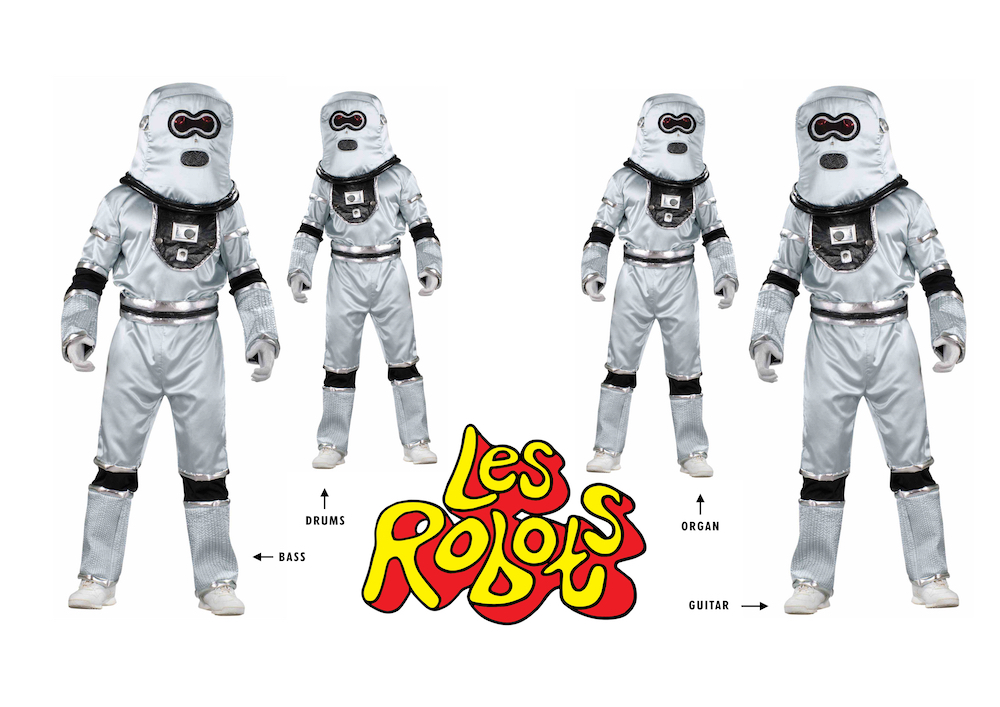 Les Robots are programmed masterminds D.V.R. and R-JoHN backed up by their live assisting bots Pete-R and C.A.S.E. Who programmed these robots? That’s officially unknown and unofficially; classified, though people do speculate that it might be legendary producer Joe Meek. Whoever or whatever programmed these mechanical men does have a soft spot for mental earthlings like The Shadows, The Ventures, Terry Terauchi, Booker T & The MG’s, Link Wray and various composers of sixties cinema soundtracks. 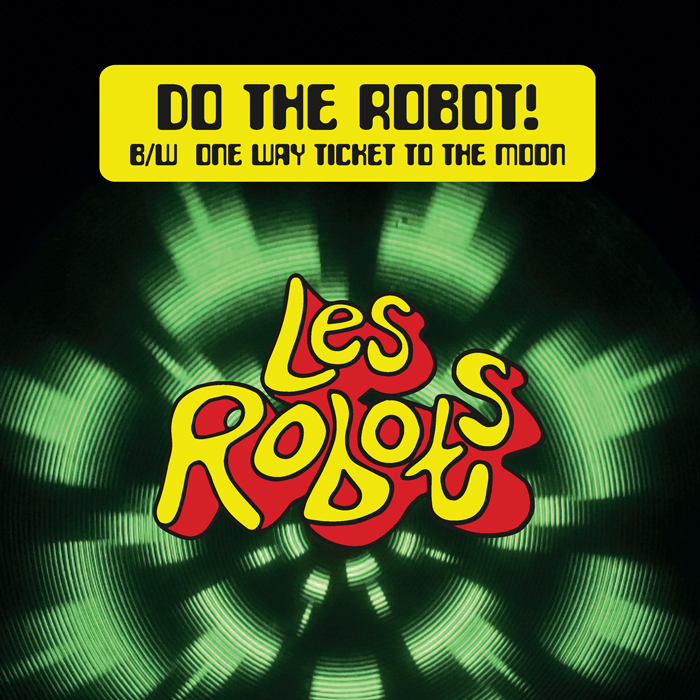 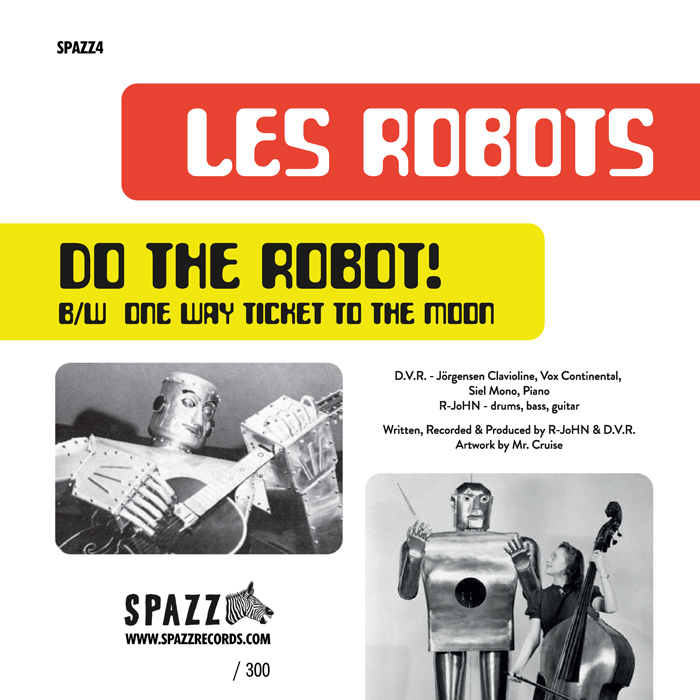 On Friday October 19 Les Robots can be seen on stage for the first time at Left Of The Dial in Rotterdam, where we will have a “Spazz Out!” on lightship Vessel 11. Next to Les Robots label mates Pig Frenzy and J.C. Thomaz & The Missing Slippers will take the stage. The “Spazz Out!” is part of the official program of the festival.

We are hyped to tell you the following: We’ve got another new release coming out! It’s “Birdcage (Slap Yourself Free) / Space Junk” by Montreal garage punk / post-punk outfit NEW VOGUE. Believe us when we say New Vogue is the new addiction that’ll spread like wildfire through your veins and hits you in a way that’ll make all the cells in your body scream for more, more, more.

As per our first two releases it’ll be pressed in a batch of 300 numbered copies on black 7” 45rpm vinyl. Pre-order starts on Monday September 10. Release on Friday October 12.

New Vogue is the project of Max and Chance (ex-Sonic Avenues). On May 17 they released a first set of new tracks as New Vogue on a self-titled album cassette. All songs written, recorded and produced by Max and Chance under the influence of Talking Heads, The Fall and Swell Maps. Mastered by Mikey Young. Critics took a like in New Vogue; Steve Adamyk wrote in Razorcake: “The Songs are upbeat and punchy, but lean on a post-punk vibe and rawness that can’t be ignored.” And D.I.Y. rock’n’roll reviewer on YouTube Anti, formerly known as Jimmy, wrote about the tape on his channel: “New Vogue is sheer chaos contained in a compact cassette, a duplicitous undertaking that regularly falters between ethereal, summery vibes and a new-wave punk intensity…”. When we heard these recordings ourself we went totally spazz! The songs “Birdcage (Slap Yourself Free)” and “Space Junk” of this album will be pressed on vinyl.

As written in their bio “…you can expect to see the group in a five-headed configuration, performing live music concerts across America and Europe in the nearish future.” We can’t wait to see them live!

What happened here? People went nuts. Such fun we’ve had at Poortgebouw Rotterdam. Thanks Poortgebouw, S.F.D., CRY, Karel for support. Spazz Records and our first release could not have been launched better as of this Friday Sept 7th. Photo by GWMP.NL

On October 19 and 20 our home town Rotterdam will be turned into a showcase festival named Left Of The Dial, named after the song by The Replacements. In the words of the organisation: “Left Of The Dial offers an exciting cross-section of the best (post) punk, garage, shoegaze and noise rock of this moment”. 48 bands will play at the festival in several locations.

We are very pleased that the organisation has offered us to host a “Spazz Out!” at Left Of The Dial on one of the most insane locations of the festival. A small red light ship at the Wijnhaven (Wine harbor) named V11 will be ours to sink on Friday October 19. The following bands will perform: Les Robots (outer space), J.C. Thomaz & The Missing Slippers (NL) and Pig Frenzy (NL). With the presentation of these bands we have two exciting announcements to make (well, we are excited about it):

Les Robots
The first announcement we make is that the debut 45 of Les Robots will be released by us. Les Robots are four programmed robots from outer space playing spooky instrumental rock’n’roll. It is unknown who programmed these bots, but what we can tell you is that the programmer does have a soft spot for these mental earthlings like Joe Meek, The Ventures, Takeshi Terrauchi, Booker T. & The MG’s, Link Wray, The Shadows and those composers of 60’s cinema soundtracks.

Listen to “Do The Robot!” by Les Robots right here:

J.C. Thomaz & The Missing Slippers
Our second coming out will be a new release by Rotterdam garage blues punk outfit J.C. Thomaz & The Missing Slippers. The band has built up quite the rep in Rotterdam. Don’t be fooled by that name, they’re not missing slippers, they’re not wearing any. They are into losing minds, money and basically anything that isn’t strapped onto them. Occasionally you will find them the next day looking for some missing band gear. You can trust them with the following, they will drink all your beer and they will deliver a wild gig with attitude. Their bio pretty much sums it up: “Sounds like The Cramps meets Robert Johnson in an acid trip down the crossroads.” We don’t have a date for this release scheduled yet. We will let you know when we do.

Pig Frenzy
On September 7 we will release our first 45 by Rotterdam garage post-punk formation Pig Frenzy, so naturally they will be playing as well. This 4-piece is already gaining quite some notoriety for their explosive live shows. Be ready for them and don’t forget to spazz out at Left Of The Dial.

We at Spazz are very proud to announce our second release. It will be the debut 7-inch of La Trinidad: “Las Venas” / “Ay, Tus Ojos”. Two songs that are taken from their excellent digitally released “El Peligro” EP. The 45 will be released on Friday September 21

The 45 will be released in a batch of 300 copies only. They will be available for pre-order starting on Monday August 13. Get your copy soon!

La Trinidad are a garage-punk-pop formation from Málaga in Spain that sings in their native tongue. La Trinidad is the name of the old working-class neighborhood of Málaga. Their influences? The period that marks the end of the totalitarian regime of general Franco to the transition into the democracy in Spain. From the subversive poets of that era to the ultra-violent and sex driven Quinqui film movement that took place during that time.

Their songs are insanely catchy; think of your favorite summer pop songs and then you’ll find out that the lyrics are intelligent, intoxicating and ridden with black humor. A sound that’s influenced by the likes of Ty Segall, Iggy & The Stooges and Spanish bands like Biznaga, Futuro Terror and Parálisis Permanente.

We at Spazz are proud to announce our first 7 inch release: Pig Frenzy – I Don’t Need You / Oral Moral. This Rotterdam (NL) four piece met up to start a post-punk band, but gloriously failed. What came out was a raw mixture of garage, punk and surf served with vulcanic violence. An eruption of musical perversity and fury.

GO TO THE SHOP

Spazz Records is a new independent record label from Rotterdam, Netherlands. On September 7th their first release will be available. Their first signing is the new band, Pig Frenzy, also from Rotterdam. The release is accompanied by a party that embraces both the launch of the new label and the release of Pig Frenzy.

The label Spazz Records is an initiative of music fanatics from Rotterdam. Both have been sharing a love for 7″ vinyl singles for years. Last February they decided to release records themselves in this format. The label has a strong preference for rock ‘n’ roll music. From garage, surf, punk rock and dirty indie to rhythm & blues, both national and international. All releases will be available in a limited edition of 300 copies.

Read More
The first release is the Rotterdam garage punk formation Pig Frenzy. On May 30th, Pig Frenzy released its first EP on cassette. From this EP, “I Do not Need You” and “Oral Moral” are being released on 7″ black vinyl. Pig Frenzy is: Timo (vocals), Micha (guitar), Amber (bass) and Lukas on drums. Their sound is a mix of garage rock with punk, post-punk and surf influences.

On the evening of September 7th this release will be celebrated in Rotterdam with a live performance of Pig Frenzy and the launch of Spazz Records.
Support will be given by the Amsterdam synth-pop act Karel (NL), the first ever performance of Brussels based lo-fi synth punk band Cry (BE) and hardcore punk band SFD (NL) from Eindhoven. Pig Frenzy will be the headliner and the Spazz DJ Team finishes off.

Location: Poortgebouw, Stieltjesstraat 38, Rotterdam, Netherlands
There is no entrance fee, but a donation to the door is highly appreciated.

Several releases are scheduled in the coming months, including from Spain and Canada. We will keep you informed and updated.