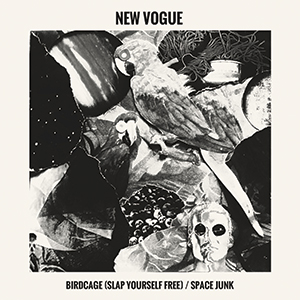 New Vogue is the project of Max and Chance (ex-Sonic Avenues). On May 17 they released a first set of new tracks as New Vogue on a self-titled album cassette. All songs written, recorded and produced by Max and Chance under the influence of Talking Heads, The Fall and Swell Maps. Mastered by Mikey Young. Critics took a like in New Vogue; Steve Adamyk wrote in Razorcake: “The Songs are upbeat and punchy, but lean on a post-punk vibe and rawness that can’t be ignored.” And D.I.Y. rock’n’roll reviewer on YouTube Anti, formerly known as Jimmy, wrote about the tape on his channel: “New Vogue is sheer chaos contained in a compact cassette, a duplicitous undertaking that regularly falters between ethereal, summery vibes and a new-wave punk intensity…”. When we heard these recordings ourself we went totally spazz! The songs “Birdcage (Slap Yourself Free)” and “Space Junk” of this album will be pressed on vinyl.