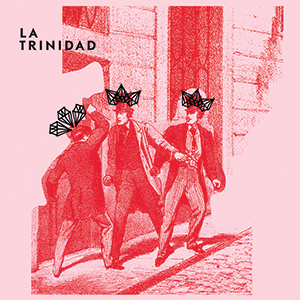 “Las Venas / Ay Tus Ojos” is the debut 7-inch of Málagan garage-punk-pop band La Trinidad. The band bears the name of the old working class neighborhood of Málaga, the hometown of the band. The period that marks the end of the regime of general Franco to the transition into democracy is a great source of inspiration for La Trinidad. From the subversive poets to the ultra-violent and sex driven Quinqui film movement. Intelligent and dark lyrics with touches of black humor and a sound and attitude that’s shaped by national bands such as Biznaga, Parálisis Permanente, Futuro Terror and international bands such as Ty Segall, Iggy & The Stooges and various ‘77 punk bands.