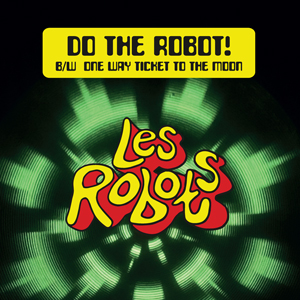 Do The Robot! / One Way Ticket To The Moon
by Les Robots

Les Robots are programmed masterminds D.V.R. and R-JoHN backed up by their live assisting bots Pete-R and C.A.S.E. Who programmed these robots? That’s officially unknown and unofficially; classified, though people do speculate that it might be legendary producer Joe Meek. Whoever or whatever programmed these mechanical men does have a soft spot for mental earthlings like The Shadows, The Ventures, Terry Terauchi, Booker T & The MG’s, Link Wray and various composers of sixties cinema soundtracks.