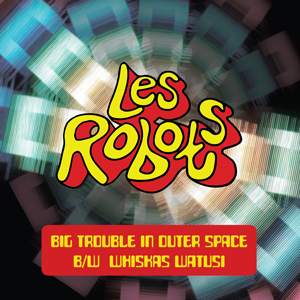 Remember those retro-futuristic robots from outer space? That crazy love-baby of Joe Meek, Les Yper-Sound and Terry Terauchi? Well, they’ve done it again. We’re pushing out another 45 of Les Robots. This 7” will be a run-up to their first album, which we will release later this year. For now; two new songs, and we must admit, they are K-I-L-L-E-R!

Recorded and Produced by R-JoHN and D.V.R.
Artwork by Peter Cruise